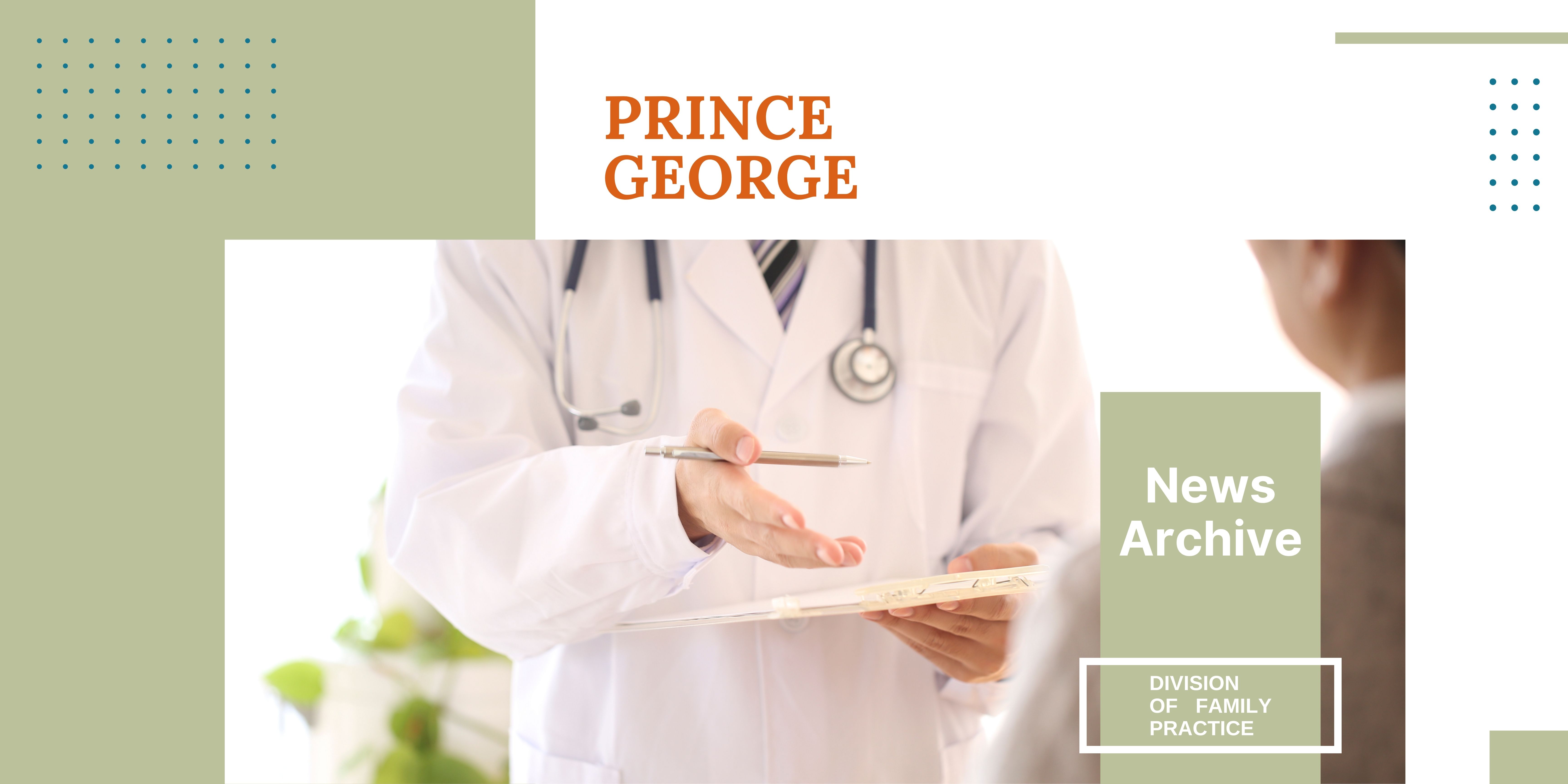 News Links From Our Partners:

Doctors of BC News

PG Doctors Celebrate “A GP for Me” Success
My Prince George Now - December 21, 2015
With the Province’s “A GP for Me” initiative coming to an end, Prince George doctors are celebrating the success of the program. The prototype initiative started in Prince George in 2010. The project aimed to remove barriers for residents wanting a dedicated family physician.
Read the full story >

Citizens of Prince George who want a Family Doctor are now able to find one
OpEd - December 12, 2014
At the close of 2014, the Prince George Division of Family Practice (PGDoFP) is very proud to announce that we have had continuous availability, or openings, for patients in at least one family doctor’s office and/or Primary Care clinic for the last 12 months.
Prince George was one of three BC communities that stepped up to prototype the A GP for Me initiative announced by the Government of BC and Doctors of BC in 2010. The initiative aims to improve access to Primary Care and help more British Columbians who want a family doctor to find one.
Read the full article >


Family-doctor access promised for 2015
Prince George Free Press - March 01, 2013
Dr. Garry Knoll from the Prince George Division was interviewed about the A GP for Me announcement and the prototype work over the last three years. “For Prince George we decided if we were going to increase capacity, a problem as large as it was, we figured it would have to be a multi-faceted program. So we sketched out a program that does a few things. The plan is the Blue Pine clinic would scale up and eventually begin to take others who identified themselves who don’t have family doctors,” said Dr. Knoll. Read the full article >

Patients will be able to talk by phone with family physicians as part of a new program announced today by the provincial Ministry of Health and the BC Medical Association.The province-wide program comes into effect April 1. Called A GP for Me, it is based on initiatives that matched patients with doctors in White Rock, Prince George and the Cowichan Valley. The trial has reportedly already matched 9,000 people in those communities with doctors. Read the full article >

GP For Me A Success Says Government
250 News - February 22, 2013
The Province has announced new incentives and supports to work towards ensuring every family that wants a family physician, can have one by 2015.  As of April 1st this year, physicians can be compensated for consultations over the phone. It’s a move that should free up time, and clear the area for someone else needing an office visit. Prince George was part of the pilot project which lead to the rolling out of the incentives province wide. During the pilot project, Prince George was able to recruit eight new physicians and the Blue Pine Health Care Clinic was established.
Read the full article >

New program links residents with family doctors
The Prince George Citizen - February 22, 2013
B.C. residents having difficulty finding a family doctor stand to benefit from a new program for primary care announced Friday in Vancouver. The $132.4 million GP and Me program will match patients with doctors and offer financial incentives for general practitioners province-wide to take on more patients, especially those with complex medical conditions, such as cancer and heart disease. The goal of the program, which starts April 1, is to ensure every B.C. resident will have a family doctor by 2015. Prince George Division Chair, Dr. Garry Knoll, spoke to the Prince George Citizen about the Blue Pine Primary Health Care Clinic in PG, which was set up as part of the A GP for Me initiative.
Read the full article >

Become a Member
Join the Prince George Division of Family Practice to get access to Pathways BC, UpToDate and more
Quick Links
Need a Family Doctor?
Urgent Care Centre
Pathways BC
Northern Health
UpToDate
College of Physicians & Surgeons of BC
Contact Us